For small independent game developers, authors, and industry artists of all kinds, conventions are our lifeblood. In a very real and meaningful way, they are an essential part of the process of putting food on the table. We use them to connect to fans, make contacts in the industry, and gain support for ideas, hobbies, and lifestyles that are often outside of the mainstream.

They should be safe havens for us, not a threat to our security.

Harassment of women has long been endemic in the convention community. I have been greatly heartened over the last decade as strides have been made in the direction of combating this harassment. Many conventions have developed zero-tolerance policies, refusing to allow people who have a history of making others feel unsafe to attend their conventions, and helping to educate convention goers on what should frankly be basic human decency. Standards have been developed that make people safer.

Odyssey Con has failed to meet those standards.

In a serious breach of professionalism, Odyssey Con published a number of private emails sent to them by a guest who felt threatened by a known offender. When the guest asked that this person be withdrawn from her for safety reasons, she was told (paraphrase) that she should spend more time with him. After all, they’d been working with him and knew him to be a great guy.

This is a travesty for a number of reasons, but mostly because it puts the burden of making someone feel safe on the person being threatened, not the organization that is allowing the threat to take place. That is unacceptable and wrong.

I understand wanting to support someone who works hard for you. Someone you think is a good person. But bringing a known predator into safe space isn’t support, it’s enabling.

Somewhere in the deleted, reposted, saved, and redeleted posts going around the internet right now over this issue are a number of apologies from the convention to the guest, ranging from a “non-apology apology” to an actual apology. The fact that in the modern information age this took days and tons of social pressure to come together is a mark against Odyssey Con, demonstrating that they have a lot to learn about harassment and how it actually works.

If I choose to attend at this point I’ll be sure to fly United Airlines to get there. I think I’ll get the same sense of warmth and caring.

Covered In Bees! was on Monday at 5pm EST with Sarah and Ben. Its inaugural episode covered different kinds of bees, villagers, and mods!

Jax Has Feels was on Tuesday at 8pm EST with Jacqueline and Justin. Its inaugural episode covered Growling Door Games’ Curse the Darkness , three different beers, and licking things!

Rose Bailey of Onyx Path has a new Patreon right over here! You should check it out and donate and get cool games like Die For You and Bright and Terrible!

Jim Stewart Allen often hosts our Twitch streams and is a joy to watch. You can find his daily Oregon Trail streams here!

Chelsea Rose, one of our channel mods, has a DA that you should check out here!

Thank you to Felix Warren and Sarah Zeiter for the beautiful art!

The Porch: (Thursday 8pm-12am)
Friends gather on a porch in a small Southern town near the end of the summer after their High School graduation. Each one of them has a burning question that they can’t ask. The Porch is a 2016 Golden Cobra-winning freeform for between 4 and 12 players

Pounded In The Butt By A Microgame: A Chuck Tingle LARP (Friday 11am-1pm)
You are a hard buckaroo looking for someone to roughhouse with in a NORMAL way. Find the hardest buds by asking the REAL questions–but be careful of void creatures and devilmen. For 8-14 players

The Witcher: From Novigrad with Love (Friday 8pm-12am)
The Free City of Novigrad, the largest city in the world, sits at the mouth of the Pontar River and it is said that every gold piece ever minted has passed through its port. The nobles of Novigrad hold the power of kings within the city’s vaulted walls, so when the most powerful of the city’s magistrates throws a party every man, woman, criminal, courtier, villain, and mercenary is sure to come out to play. On the eve of the Third Nilfgaardian war, Lady Mary Du Montillion is holding court. The players of the city are gathering.. and something is stirring deep in the heart of the city, something that should have them all very very afraid. Based on The Witcher Universe created by Andrzej Sapkowski, The Witcher: From Novigrad with Love is a parlor LARP that focuses on the relationships between the upper and middle classes in a low-fantasy medieval setting.

Lords of Hell: Absence of Darkness? (Friday 12am-4am)
Netherworlds are dark places where evil deeds like Murder, Extortion, Hostile Redecorating, Familial Betrayal, Cake Theft, and other things considered most heinous crimes by humans are considered just part of everyday life. Netherworlds are planets inhabited by Demons, where the most powerful rule as Overlords. Just as there are many different planets, there are many different Netherworlds as well. In order to keep some semblance of order amongst the Netherworlds, the Overlords select a puissant Demon to rule as the Supreme OverLord. With the death of the previous Supreme Overlord after an unfortunate pretzel incident, the most powerful Overlords are gathering to elect a new Supreme Overlord. Lords of Hell is a Parlour LARP where players will be invited to embody over the top demons with wild, inhuman personalities and desires.

Black Sunday 1935: (Saturday 9am-1am)
A carnival has to ride out the Black Sunday storm of ‘35 in the church basement of a town that both hates and loves them. An American freeform based on southern gothic classics like “A Good Man Is Hard To Find” and Carnivale. Takes up to 22 players.

Our Kickstarter finished at $43,124. That’s just over 172%–thank you so much for all of your generous donations! More updates on that as the week progresses.

As has been the case for the last five years, Damocles Thread Development will be running the LARP track at MAGFest from January 5th-8th. This year, we’ve decided to put up our schedule beforehand, so you know what you’re getting into. All LARPs are free and open to MAGFest badgeholders.

We’re at just under $9k(!) and a lot of you have asked for the actual rules of the game. We wouldn’t be designing a theater game if we didn’t enjoy showing off, so attached to this post is the first iteration of the rules for Curtain Call!

Please feel free to leave a comment with any questions or concerns you may have. 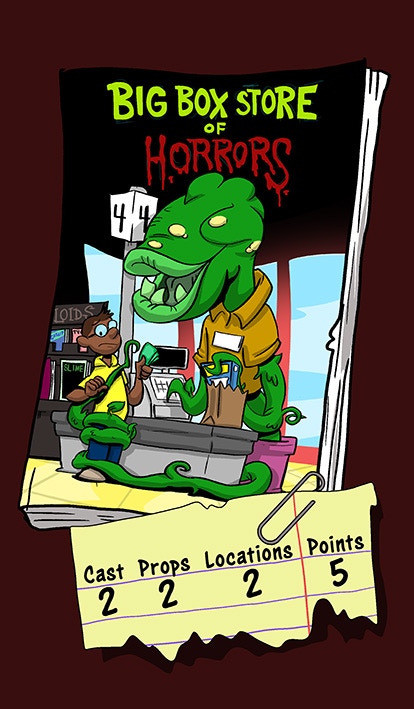 You finally got the rights to The Lion King In Yellow. You got permission to use the Black Box Theater.  That’s when all the trouble began. You had hoped–in vain, perhaps–for An Unusual Air of Cooperation. What you got was an Angry Props Mistress, a couple of Stoned Techs, and an actor who insists on Providing Their Own Costume, no matter how ridiculous. Tech week is tomorrow. What do you do?

Curtain Call is a fun, fast-paced card game for three to six players about the trials and tribulations of casting, directing, and running a show. Illustrated by R.K. Milholland of Something Positive, and including stories from Broadway professionals and amateur companies alike, Curtain Call is sure to strike a chord with anyone involved in the world of theater.

Or make them recoil in horror at the memories.

You can back the Kickstarter here!

Well, I haven’t felt like being on the internet for the past few days for what should be obvious reasons. As part of an exercise in trying to get something else, anything else on my screen, let’s talk about conventions.

First off the entire staff was efficient, friendly, and awesome as usual. Meta is a weird little beastie, reminding me far more of the science conferences of academia or Small Press Expo more than a gaming con. This is deliberate. This is a con where designers and professionals meet to knock the rough corners off of their fresh hewn games and for gamers to get a first look at what might be in the coming year.

We got great feedback on our games. One of the Damocles team, the lovely and talented Ms. Jacqueline  Bryk, won the Golden Cobra award for Most Convention-Ready Design. I played some truly innovative games with great worlds and truly unique mechanics. I even played a well balanced and crunchy  FUDGE/FATE hack that keeps the speed and fluidity of the originals. I am torn about how to explain it without giving too much away, since you can’t copyright a game mechanic. Suffice to say, it takes place in 1432 in British-occupied France. It beautifully decouples the danger of an action from its difficulty and I am stoked as hell to play it. I could not find a website for the creator, but if i do I will post it here.

Other things happened too. I am sure Jacqueline or Jocelyn will mention them. Watch this space since the fruits of our Metatopian labors will be hitting Kickstarter this Thursday.

This past Metatopia was pretty amazing.  I met some wonderful people, played some innovative games, and got excellent feedback on our current project.  Also, it gives me great pleasure to congratulate Jacqueline Bryk on winning a Golden Cobra for her free-form LARP, The Porch!  Now, or someday soon you can check it out here.

All in all it was a fabulous con.  I left with more creative energy than what I came in with, which is always a plus.  The feedback we got on Curtain Call, formerly known as The Show Must Go!, was along lines which were not unexpected.  Questions such as,

“How does this actor contain another actor? That seems pretty gross.”

could only be answered by acknowledging that we needed to tighten up the language on the cards.  Something which happened yesterday line by line and card by card.  Also, players need a chance to build up their theater company before someone else can kick it down.  So, some tweaks there as well.  The most gratifying piece of feedback was that the mechanics and play of the game really feel like local theater!  Making sure the theme of a game is present and apparent in every aspect of it is just so important that hearing that was a massive ‘phwew!’.  Now any other challenge can be conquered.

Including those beyond the game table such as packaging for retail.  A very informative panel hosted by Melissa Lewis-Gentry of Modern Myths gave some really important insights such as the box for the game can be bigger than the game itself.  The past couple weeks I’ve been going back and forth with manufacturers about the precise interior vs. exterior dimensions of custom made boxes and now I can climb out of that rabbit hole. Yay!  The atmosphere of this Metatopia was very warm and very supportive.  People all around the con seemed very respectful of other’s space, physical and otherwise.  Any criticism given was constructive and folks were concerned about which aspect of a game a designer wanted to playtest showing the really collaborative feel to the con.

Also, I got to be a dinosaur for an hour.  Not a dinosaur princess mind you, just an average janeasaur, which was awesome!  There’s something very peaceful about getting together with some fellow gamers and playing make believe.  I haven’t hid in a cave (under some tables) to escape an approaching sky-predator (another LARPer) in waay too long.  That’s all for now.